Value bets are bets on odds that are overstated by the bookmaker. Such an overestimation of the coefficient value can occur when the estimate of the probability of an outcome, according to analysts of the bookmaker, is lower than its true probability.

In order to understand in more detail, consider such a thing as a bookmaker's margin.

Imagine a situation where two players decided to bet on different outcomes - the loss of "eagle" or "tails". The probability of "heads" or "tails" is 50% and the players are in equal conditions.

Calculate the coefficient for the bet. The formula for calculating the probability coefficient:

K = 1/P, where P is the probability of the event outcome, in this case the "eagle".

Of course, in the case of single bets on luck, the difference can not be felt, but in the long term, due to the understated coefficient on the part of the bookmaker, you will remain in the red, as the theory of probability on the side of the bookmaker.

There are situations when the bookmaker, incorrectly estimating the probability of the outcome, gives an inflated coefficient.

In other words, overweight bets should have the following property:

K > 1/P, where P is the true probability of the event outcome and K is the bookmaker's coefficient for this outcome.

Very often, the strategy of valuing bets is called value betting, and the bets themselves are overweight — value bets.

From the definition of the value bets, we know that in order to find the value bets it is necessary to know the true probability of the outcome of the event, which is quite difficult. Below we describe a few ways to search.

Self-estimate of the true probability

Of course, if You are a great analyst, well versed in the sport, League or playing teams, or in the end a person with excellent intuition, then to assess the true probability of the outcome for You is not difficult.

For example, if the bookmaker gives a coefficient of 1.7 for the victory of Spartak over Dynamo, the probability of this outcome according to the bookmaker (taking into account the margin factor) will be 100/1.7 = 58.8%.

Statistical method for estimation of the real probability

In fact, it is very problematic to correctly assess the probability itself, the better than it will make the analytical staff of the bookmaker. Of course there may be exceptions, but these are only exceptions. Therefore, another (but more real) way to estimate the true probability is the statistical method.

For example, the victory of Spartak over Dynamo several Bookmakers give the following coefficients:

Accordingly, the bookmakers, the coefficient for the victory of Spartak which will be greater than 1.67, can be considered overvalued, since their probability is higher than the true.

The more bookmakers involved in the evaluation of the real probability, the more accurate it turns out.

Surebet as a source of value bets

Another good source of finding value bets are the surebets. Of all the bets that make up the surebet, there is at least one value bet. Moreover, it is bet, most likely, was the initiator of the arb, because it is underestimated by the bookmaker outcome of the event and caused the formation of the surebet.

Value bets finder BreakingBet allows you to ignore the manual search value bets, providing a search tool. The valuebets search is based on a statistical method. In accordance with user settings, the service finds for the probability for each odd and calculates the overvaluation.

Now let's look at an example of setting up and searching for surebets using the service. Let's say we play at three bookmakers — Olimp, Fonbet, Bet365 and want to find value bets.

Go to the filter settings: 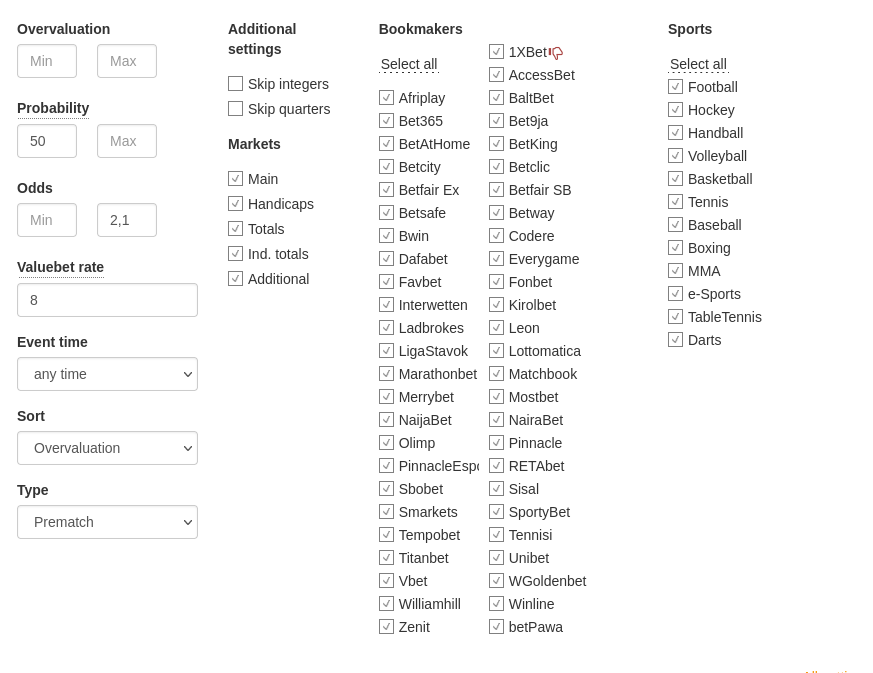 Overvaluation — the main indicator showing the value of overvaluation for the current odd.

Propability — an indicator of the probability of an odd, calculated as the average of all the probabilities of this odd in scanned bookmakers. We recommend setting a minimum value of 50.

The valuebet rate is a parameter that specifies the minimum number of bookmakers that should form a surebet with an outcome, so that it can be assumed that this outcome is a bet with a preponderance. The greater this parameter, the more offices should form a arb with the outcome and the more accurate the assumption of its "value bet". The optimal value is 8-10.

Please pay attention! The odd can be highly overvaluated, but have a low probability, which makes such a bet very risky. We do not recommend using outcomes with a probability lower than 45-50%. The higher the probability, the more chances that the bet will win (in theory).

Odds — the numerical range of odds values. It is no secret that the probability of the outcome calculated by the bookmaker directly depends on its value. Therefore, in order to increase the chances of success, we do not recommend betting on odds greater than 2.2.

After settings we get a list of found value bets: 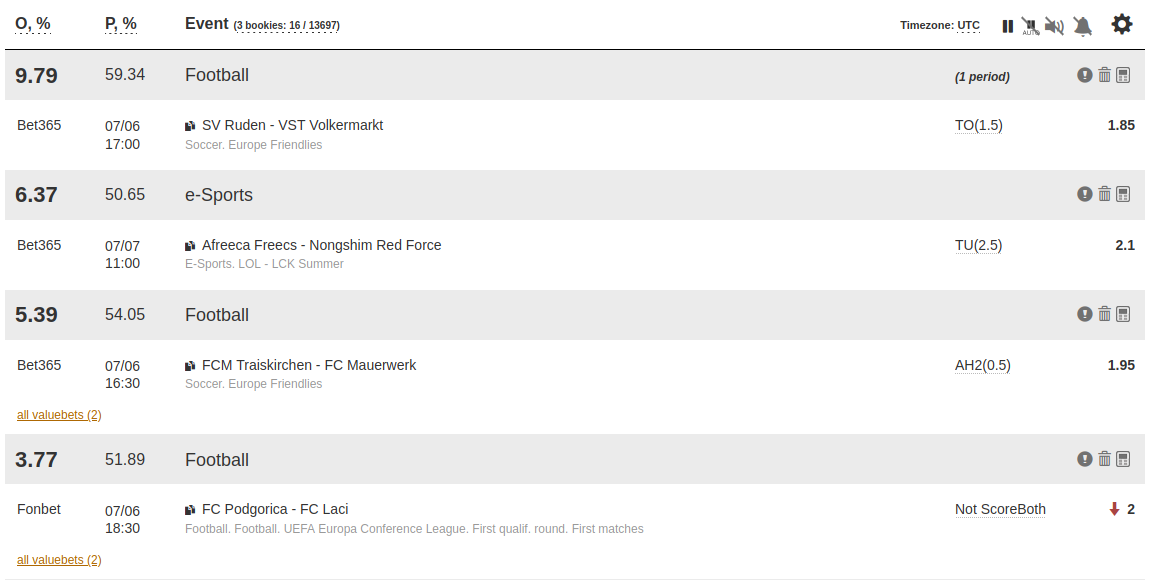 Do not forget to add your bets to History to be able to analyze the results of your work.

Kelly criterion as a way to select the bet amount

Often, when playing on value bets, the Kelly criterion is used to determine the value of the bet amount as a percentage of the total Bank. It is designed to optimize the growth rate of the General Bank and is used not only in sports betting.

The formula for calculating the amount of the bet:

Do not forget an important rule: if Your estimate of the true probability is lower than the probability of the outcome of the event at the bookmaker, then it is not recommended to bet.

Unfortunately, the presence of such a parameter as the true probability in the formula significantly reduces the possibility of its use, because we need to know it. Nevertheless, it also happens that players minimize the risks of rapid loss of the Bank, putting not the percentage of the Bank, obtained after the calculations, and a percentage of this percentage. This greatly reduces the growth rate of the Bank, but also reduces the amount of lost funds in case bet loses. This approach is often referred to as a Fractional Kelly criterion.

Pros and cons when playing on value bets

Value Betting is a rather complex strategy compared to Arbitrage Betting, but it has a number of unique features that make it attractive to professional players.

May be useful
← What are surebets?
How do bookmakers identify arbers? Tips for beginners. →