In this article, we’ll explain the concept of bookmaker arbs and tell you how to spot them in betting offices. We’ll also show you an example formula you can use to find an arb with the concomitant calculations and describe the basic difficulties that you can face here.

Arbs are situations on the market of sport betting when, with certain values of coefficients in different betting offices, the bet on all possible elements of the outcome group (for instance, the victory of the first team, a draw or the victory of the second team) will bring a profit under any outcome. A more detailed definition can be found on Wikipedia.

Bets on arbs are one of the many strategies one can use in sport betting; this strategy is also referred to as sporting arbitrage. The players who use arbs in their play are called arbers.

The outcomes that constitute a bookmaker arb are called the hands of the arb. For example, for the arb V1 (the first team’s victory) — V2 (the second team’s victory), the hands would be H1 and H2 respectively.

Prematch arbs are much easier to work with than live arbs, where coefficients fluctuate very often, but the profitability of such arbs is normally lower and the degree of risk higher. At the same time, it is highly recommended for a beginner in the world of bookmaker arbs wishing to learn all ins and outs of sporting arbitrage to begin with prematch arbs. The experience gained at this stage is simply indispensable for further playing with live arbs.

Arbs can also vary in the amount of outcomes (hands) that constitute the arb itself.

The most common types of arbs:

Of course, arbs can consist of more that three outcomes, but such arbs are less frequent and more specific, so we’ll try to describe these in a separate article.

Example of an arb

Let’s take a look at an arb with the help of an example:

We can see that our arb consists of two outcomes (hands):

And now the most interesting part: let’s calculate the profit.

If the first team wins, we get the earnings of the first hand, but the second hand loses and the money that was bet on it is lost.

Let’s analyze the other situation, where the second team wins.

If a draw happens, the second hand also wins and the calculations are the same as those in the case of the second team’s victory.

Ultimately, we not only avoid losing money, but we also gain 2.3 or 2 dollars under any outcome of the game, having bet on all possible situations.

But why did we bet these particular sums? Why don’t we bet $7.5 for each hand? If you make the calculations, you’ll see that in this case, we won’t have a guaranteed profit under any outcome of the game. Calculating bet sums is a separate topic relying on mathematical formulas. An arb scanner makes the calculations for you, so we won’t encumber you with these details in this article.

Why do arbs occur?

Various reasons make bookmaker arbs occur, but the most common ones are:

While in the first two cases we can boldly take action, it is always necessary to be extra-careful when there is an obvious mistake committed by the bookmaker. The bookmaker is very likely to cancel such a bet, and in this case, if we’ve bet something on the other hand of the arb, we risk losing money.

Bookmaker arbs can be found both manually and with the use of special software.

Searching for arbs manually is a very difficult task that requires retaining large pieces of information in the mind, but there are people who search for arbs manually, so we can’t say it’s impossible. That such arbers are undoubtedly professionals with a huge arbing background is a different story.

Searching for bookmaker arbs with the help of scanners is an easier way; however, it must normally be paid for.

Example of how an arb is calculated online

Let’s take the arb we’ve already examined and show how easily the bet sum and the profits can be calculated with the help of an arb scanner and the built-in arb calculator: 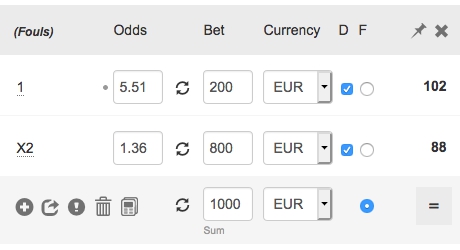 The only thing we’ve bothered to do is setting a total bet sum figure of $1000 and choosing a rounding figure of 100. The arb calculator has automatically given us the bet sums for each hand as well as our profit for each outcome of the game.

We can also set our own bet sums — the arb calculator will prcoess everything for us and display the final profit for each hand. Let’s conduct an experiment and set the bet sums $500 for each hand; now let’s see the results: 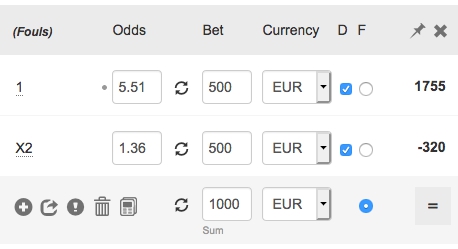 We can see that in this case, our profit isn’t guaranteed, and if the second hand wins, we still lose money.

Learning all the subtleties on your own is good, but more often than not, it takes the most precious recourse, time. We firmly believe that using an arb scanner is a reasonable way to save time and, consequently, earn more.

If the thought of arbs being a great means to assuredly gain profits without any significant difficulties involved has already crossed your mind, I must disappoint you. Bets on arbs stopped to be an easy way to make money a long time ago.

The major aspects that make this process more difficult:

Special attention on behalf of bookmakers

Not all bookmakers like arbers; to be precise, virtually none of them do. Bookmakers struggle to identify arbers and make their life as difficult as possible using various means, from the splitting of the maximum sum to account blocking.

Coefficient changes during a game

Of course, this applies mostly to live arbs, since these involve very frequent coefficient changes.

Bet canceling on behalf of the bookmaker (with refunding)

It is also possible that the betting office has let a mistake slip into the line, with the wrong coefficient for a certain event. Oftentimes, such outcomes are arb triggers and pose one of the arb hands. Can you imagine a situation when the bets on an arb have already been made, but the bookmaker, on spotting the mistake, simply revokes your bet and calculates it with the coefficient 1? Such situations aren’t at all that rare.

Different betting offices can have different rules for calculating certain bets. Normally, the rules vary depending on the kind of sport and sometimes on the championship/league/tournament.

It is necessary to know these rules to prevent a situation where, for instance, both hands lose in an arb with 2 outcomes, because the first one did take into account the overtime, and the other didn’t.

We hope this article has succeeded to an extent in explaining to you what a bookmaker arb is: whatever the difficulties, it’s a great strategy to gain profits.

May be useful
← Types of odds and desingnations
What are value bets? →